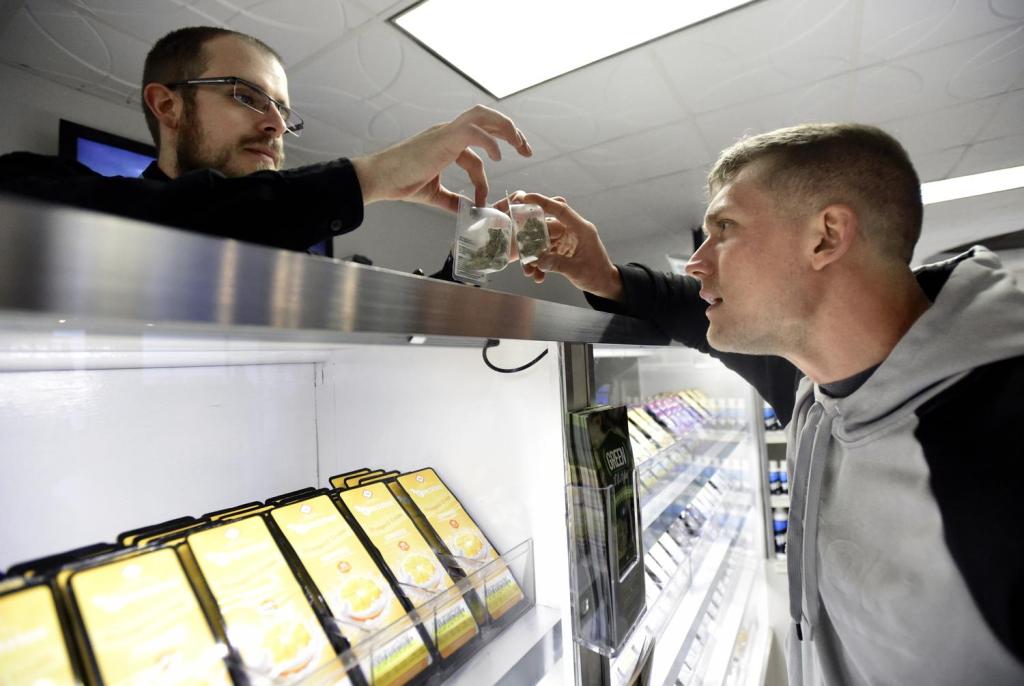 Longmont City Council’s Tuesday night study session is to include a discussion whether to proceed with considering an ordinance that would allow home deliveries of medical marijuana from city-licensed establishments.

The proposed Longmont measure, if formally adopted in council votes during future regular meetings, would largely follow state regulations stemming from a state law that permitted local jurisdictions to allow medical-majrijuana home deliveries as of this past Jan. 1.

Council members noted the possibility during several meetings earlier this year and voted unanimously in June to have staff bring back information and a draft ordinance for council review, which now is set for Tuesday night.

The draft ordinance under council consideration would not permit home deliveries of recreational, nonmedical cannabis products, something state law will not permit to begin until Jan. 1, 2021, and that will only be allowed where local licensing jurisdictions allow it.

All four have city licenses for on-premises retail sales of recreational cannabis products, but only one, Twin Peaks Dispensary, currently is also licensed for medical marijuana products sales, according to Michelle Sebestyen, the licensing coordinator in the Longmont City Clerk’s Office.

In a memo for Tuesday’s study session, city staff said it reached out to Longmont’s four dispensaries for their input regarding medical marijuana delivery and received comments from representatives of two of them, Medicine Man and The Green Solution.

Kristen Thomson, of Denver-based TGS Global, writing on behalf of The Green Solution, said: “We understand the desire to provide the commercial delivery of medical marijuana but do feel the current method of medical delivery using transporting caregivers provides the access patients need in a city the size of Longmont.

“Our greatest concern in rolling out delivery in Longmont is that it does not erode the store-front model,” Thomson said in a July 28 email to Sebestyen.

Thomson also wrote that The Green Solution is opposed to allowing the delivery of recreational marijuana.

Medicine Man CEO Sally Vander Veer wrote Sebetstyen that “overall, I am not in favor of cannabis delivery services.”

However, Vander Veer’s July 27 email listed a number of possible pros and cons about medical marijuana home deliveries, points she said she felt are most important to consider for any type of delivery of cannabis products.

The “pro,” she said, would be that “medical marijuana customers can receive their medicine in a more convenient manner. The same would be true if this were to expand to retail customers; convenience factor would be desirable.”

One of the points Vander Veer listed against home deliveries was what she said is a potential “compliance/enforcement” problem.

“I feel that the police department would have a difficult time knowing when a delivery was legitimate without approaching the delivery person and/or customer. This would open the doors wide open for drug dealers to visit their customers posing as a delivery service,” Vander Veer wrote.

Last March, Boulder’s Native Roots announced it would be the first medical marijuana business in the state to be allowed to deliver cannabis products to patients 21 and older  in their homes, a service enabled under the new state law, whose sponsors included Rep. Jonathan Singer, D-Longmont.

“We wrote this bill to ensure that patients could get safe access to their medicine when they are not able or well enough to pick it up themselves,” Singer stated in a Native Roots news release at the time.

Longmont’s city staff is seeking council direction Tuesday about whether to proceed with scheduling a medical marijuana home-delivery enabling ordinance for future formal action, and if so, whether the council wants any changes in the potential ordinance the staff has drafted for the study session.

Where: Council and city staff members will be participating from remote locations. Residents can watch the meeting by clicking “play” on the video link within the interactive agenda window.