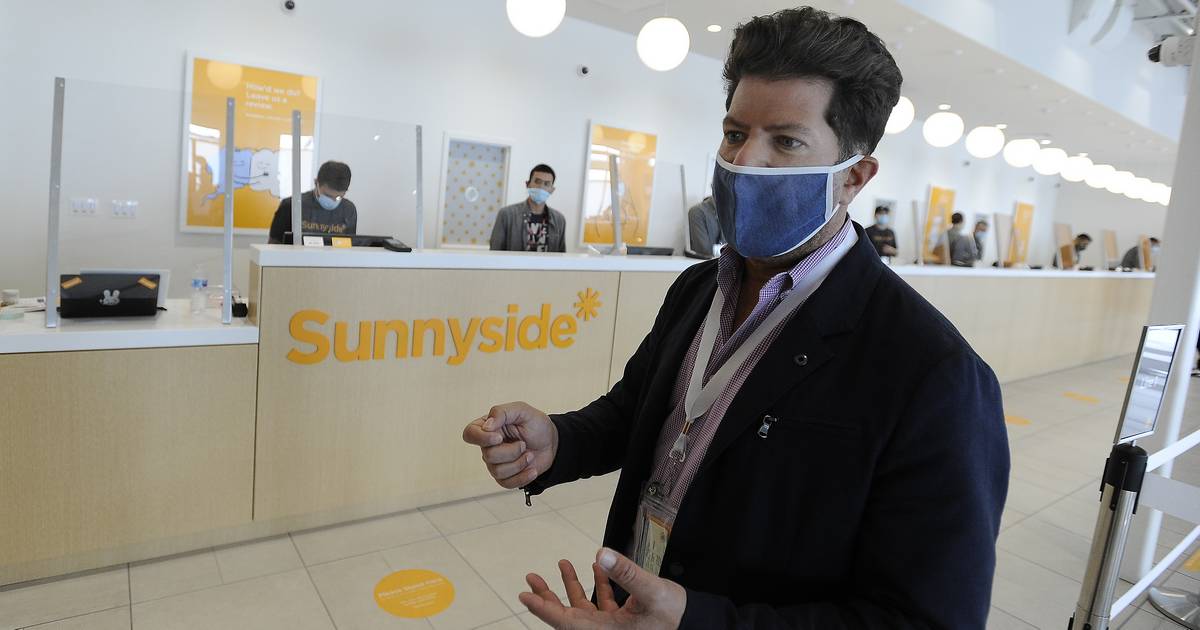 Schaumburg’s first marijuana dispensary opened with little fanfare Wednesday — but the customers who visited Sunnyside were happy to learn it’s ready for business.

“It’s nice,” said Round Lake resident Jose Aguirre, who stopped in to buy cannabis flower and a vape cartridge. “Everybody’s friendly, and if you have any questions, everyone is well-informed.”

Open daily from 9 a.m. to 9 p.m., the store aims to serve people who are recreational users, not people with medicinal needs.

Because of the COVID-19 crisis, customers must place orders online at sunnyside.shop and pick up their products at scheduled times. People who drop by will be allowed to make orders using iPad tablets outside the store.

The 11,500-square-foot dispensary occupies what had been two storefronts. Most of the interior — painted white and orange, the official Sunnyside colors — is open space, providing customers a lot of room to circulate.

Product displays featuring packaging for marijuana flower, pot-infused gummies, oils, pipes and other items line a wall near the entrance. The actual items are in a vault hidden from public view.

A long sales counter with 16 registers occupies quite a bit of space, too. Purchases can be made with cash or debit cards but not credit cards.

“It’s clean,” said Smith, who bought pre-rolled joints. “It looks like they’ve got everything organized.”

Chicago-based Cresco also owns dispensaries in Buffalo Grove, Elmwood Park, Chicago and elsewhere in Illinois, as well as in other states.

The village board last week approved plans for a dispensary at 820 E. Golf Road. To be called Enlightened, it’ll be run by Chicago-based Revolution Global, which has a medical marijuana dispensary in Mount Prospect.

Illinois’ roughly 60 marijuana dispensaries sold more than $60.9 million worth of products in July, according to the Illinois Department of Financial and Professional Regulation. That was a monthly record for the state since recreational cannabis use and possession by people 21 or older became legal Jan. 1.