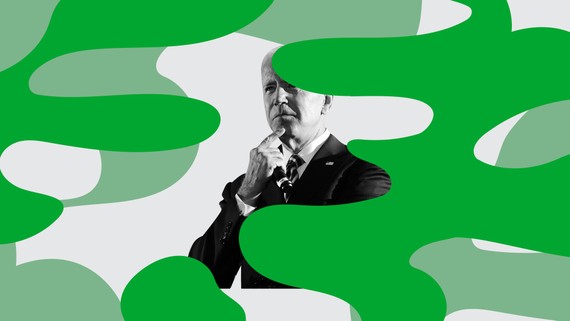 Democratic political consultants dream of issues like marijuana legalization. Democrats are overwhelmingly in favor of it, polls show. So are independents. A majority of Republicans favor it now too. It motivates progressives, young people, and Black Americans to vote. Put it on the ballot, and it’s proved a sure way to boost turnout for supportive politicians. It’s popular in key presidential-election states, including Michigan, Pennsylvania, Colorado, Florida, Arizona, and Virginia. There’s no clear political downside—although marijuana legalization motivates its supporters, it doesn’t motivate its opponents. For the Democratic presidential nominee, the upsides of supporting it would include energizing a very committed group of single-issue voters and making a major move toward criminal-justice reform and the Bernie Sanders agenda.

Democrats eager for Biden to support legalization have theories about why he won’t. His aides insist they’re all wrong. It’s not, they say, because he’s from a generation scared by Reefer Madness. It’s not, they say, because he spent a career in Washington pushing for mandatory minimum sentencing and other changes to drug laws. It’s definitely not, according to people who have discussed the policy with him, because he’s a teetotaler whose father battled alcoholism and whose son has fought addiction, and who’s had gateway-drug anxieties drilled into him.

With legalization seeming such an obvious political win, all that’s stopping Biden, current and former aides say, is public health. He’s read the studies, or at least, summaries of the studies (campaign aides pointed me to this one). He wants to see more. He’s looking for something definitive to assure him that legalizing won’t lead to serious mental or physical problems, in teens or adults.

America appears to be moving on without him, and so are the future leaders of his party.

If Biden really has his eyes on public health, he should think about how many Black people end up in jail for marijuana sale and possession, argues Jackson, Mississippi, Mayor Chokwe Lumumba—a young Black progressive who oversaw local decriminalization in his city in 2018. Biden should also think about how an illicit, unregulated market is leading to the drug being laced with other chemicals, and the health effects of that, Lumumba told me. If Biden thinks marijuana is addictive, he said, then he should explain what makes it worse than alcohol, caffeine, and nicotine. Legalization is a necessary part of criminal-justice reform, Lumumba said. “I would encourage him and his campaign more broadly to do more research on some of the finer points,” he added.

Alternatively, John Fetterman, the lieutenant governor of Pennsylvania, says Biden should think about how legalization could raise tax revenue in the post-pandemic economy of state budget deficits. “What better time than now to have that conversation?” Fetterman told me. Before the coronavirus outbreak, Fetterman spent a year traveling his state, including areas that mostly voted for Trump in 2016, proselytizing “commonsense” legalization. There’s even more reason to agree with him now, he said. “It’s the ultimate policy and financial low-hanging fruit,” he said. “If you’re not moved by the gross racial disparities, what state doesn’t need a couple hundred million more in revenue at this point?”

Amid the criticism that Biden hasn’t taken a definitive stance on legalization, it’s easy to lose track of how far ahead he is of any other major-party presidential nominee in history in terms of changing marijuana policy. He’d decriminalize use, which would mean fines instead of jail time, and move to expunge records for using. He’d remove federal enforcement in states that have legalized the drug. That’s further, by far, than Donald Trump, or Barack Obama, has gone. Biden would move marijuana off as a Schedule 1 narcotic, the same category as heroin, but would not take it off the illegal-drugs schedule entirely, so that federal law would treat it the way it does alcohol or nicotine.

John Morgan, a Florida Biden donor and a major proponent of legalization in his state, is a proud user of marijuana, and told me he knows many Democrats and Republicans who are too. He’s been able to get Ron DeSantis, his state’s Republican governor and a big Trump ally, on board with legalization. Morgan said that when he broached the issue briefly with Biden last year ahead of hosting a fundraiser for him, the candidate responded, “‘I know where you are on this.’ I just took it to be as You know where I am on this.”

Erik Altieri, the executive director of the National Organization for the Reform of Marijuana Laws, a pro-legalization lobbying group, told me that although his organization heard from several of the other leading Democratic presidential campaigns last year, it never got a call from the Biden team.

Biden’s resistance is particularly frustrating for those who remember how he was a pioneer in standing up for legalizing same-sex marriage, the biggest recent issue on which laws suddenly flipped to catch up to changing views. Maybe, one person who’s spoken with Biden theorized, the difference is that he knew gay people, but believes—almost certainly falsely—that he doesn’t know people who regularly use marijuana.

That’s a bad guess too, Biden aides told me.

“As science ends up with more conclusive evidence regarding the impact of marijuana, I think he would look at that data. But he’s being asked to make a decision right now. This is where the science guides him,” Stef Feldman, Biden’s policy director, explained to me. “When he looked to put down his position on marijuana in writing for the purposes of the campaign, he asked for an update on where science was today. He didn’t ask for an update on what views and science said 20 years ago. He wanted to know what was the best information we know now. And that is what he made his decision on.”

This can seem both perfectly reasonable and a ridiculous excuse. There isn’t some conclusive study about health effects that Biden is ignoring, but one is also not likely to emerge anytime soon. And though they insist this is all about health, other ripples from legalization are on the minds of institutionalists like Biden and his close advisers: trade deals that require both sides to keep marijuana illegal would have to be rewritten, half a century of American pressure on other countries about their drug policies would be reversed, and hard-line police unions would have to be convinced that he wasn’t just giving in to stoners.

Realistically, marijuana isn’t a priority right now for the campaign. Legalization is at once too small an issue for Biden’s tiny team to focus on and too large an issue to take a stand on without fuller vetting. And it comes with a frustration among people close to Biden, who point out that liberals talk about trusting science on everything from climate change to wearing masks—and, notably, wanted vaping restricted because the health effects were unclear—but are willing to let that standard slide here because they want marijuana to be legal.

Biden’s compromise: going right to the edge of legalization, while appointing a criminal-justice task force for his campaign whose members have each supported at least some approach to legalization. But that sort of signaling doesn’t get people to the polls. “Being cute is fine. Being bold is motivating,” Ben Wessel, the director of NextGen America, a group focused on boosting political involvement among younger voters, told me.

“If Biden said he wants to legalize marijuana tomorrow, it would help him get reluctant young voters off the fence and come home to vote for Biden—especially Bernie [Sanders] supporters, especially young people of color who have been screwed by a criminal-justice system that treats them unfairly on marijuana issues,” Wessel told me. Publicly supporting marijuana legalization would be an easy, attention-grabbing move, and might help many Sanders diehards get past the fact that he’s not where they want him to be on the rest of their candidate’s democratic-socialist agenda.

Altieri, the pro-marijuana lobbyist, said coming up with a legalization policy wouldn’t take much work: Sanders had one, as did Senator Elizabeth Warren of Massachusetts and Andrew Yang. Or Biden could check in with Senator Cory Booker of New Jersey, who wrote a legalization bill based on the argument that legalization is essential to the criminal-justice-reform conversation. Altieri is not impressed with how little Biden has moved so far. “Where he’s at now would have been maybe a bold stance in 1988. It’s not much of one in 2020,” he told me.

In 2018, top Democrats credited a legalization ballot initiative in Michigan with boosting turnout and producing the biggest blue wave in the country—winning races for governor, Senate, attorney general, and secretary of state, along with flipping two congressional seats and multiple state-legislature seats. A ballot initiative is expected for the fall in Arizona, New Jersey, South Dakota, and possibly Montana. Anyone who believes—hopefully, or out of cynical political calculation—that Biden will announce some big change in his thinking, aides told me, will be disappointed.

Just do it, Fetterman said: Do it, if only to secure Pennsylvania’s electoral votes and get that much closer to the White House. “If Joe Biden’s account tweeted out ‘Legal. Weed.,’ it would get a million likes in the first two hours. I guarantee it. And no one’s going to accuse Uncle Joe of being a pothead,” Fetterman told me. “If you think weed is the devil’s tobacco, you ain’t voting for Biden anyway.”