In this April 22, 2015 file photo, residents of Alabama stand outside of the state house in favor of medicinal marijuana legalization at a rally in Montgomery, Ala. A bill to allow medical marijuana cleared its first hurdle Wednesday, Feb. 19, 2020, in the Alabama Legislature, giving hope to advocates after years of setbacks. (Photo: Brynn Anderson, AP)

A bill to allow medical marijuana in Alabama cleared its first hurdle on Wednesday after the Senate Judiciary Committee voted to send it to the full chamber.

“I know some people are worried send a bad signal to the children,” Melson said before the start of a 90-minute hearing before the committee. “I think it’s sends a better signal that we’re willing to treat a condition where nothing else has worked.”

Under Melson’s bill, medical cannabis would available to anyone 19 years or older who a physician certifies as having a qualifying medical condition by a physician. Patients 18 or younger would need a parent or guardian to administer cannabis. The patient would have to apply for a medical cannabis card, which would cost no more than $65.

The bill would also create an Alabama Medical Cannabis Commission, which would oversee a patient registry and license medical cannabis facilities in the state. The Department of Agriculture and Industries would develop rules on the cultivation of marijuana in Alabama; the bill requires cultivators to have resided in the state for at least eight years.

“Honestly, some people look at 15 and say ‘Really? That one?’ ” Melson said during the hearing. “That’s because they don’t have it or don’t know the literature.”

The bill would forbid smoking, vaping, or consuming medical cannabis in baked or infused products. Patients would be able to consume cannabis as a tablet, in oil, in an inhaler or in glycerin. Tim Morris, a retired mechanic who testified at a meeting last year about his use of marijuana to manage pain, said Wednesday the method of delivery mattered less to him than having access.

“Doing the CBD/THC tinctures, in an oil or in a candy … is the best way to get it because it has the most effect,” he said.

More: At medical cannabis commission meeting, stories of pain and pleas for relief

But unlike last year’s bill — which only authorized medical cannabis if traditional therapies didn’t work — the bill would allow physicians to recommend cannabis if they felt it was the best approach.

Supporters of the measure told stories of pain that cannabis helped to ease. Cynthia Atkinson, the widow of former WSFA meteorologist Dan Atkinson, said her husband’s pain from Parkinson’s Disease eased when they applied medical marijuana patches to his legs during a trip to Colorado in 2015.

“While it may not be a cure all, why would we not allow people the option of something safer than opioids or chemicals?” she asked. “We’re talking about a plant, a God-given plant … an option that’s going to be monitored by the doctors.”

In 2014, the Alabama Legislature approved Carly’s Law, authorizing studies of CBD and their impact on children suffering seizures. The lead investigator in the trial said in 2018 that there had been a “highly significant” reduction in seizures for children given CBD. 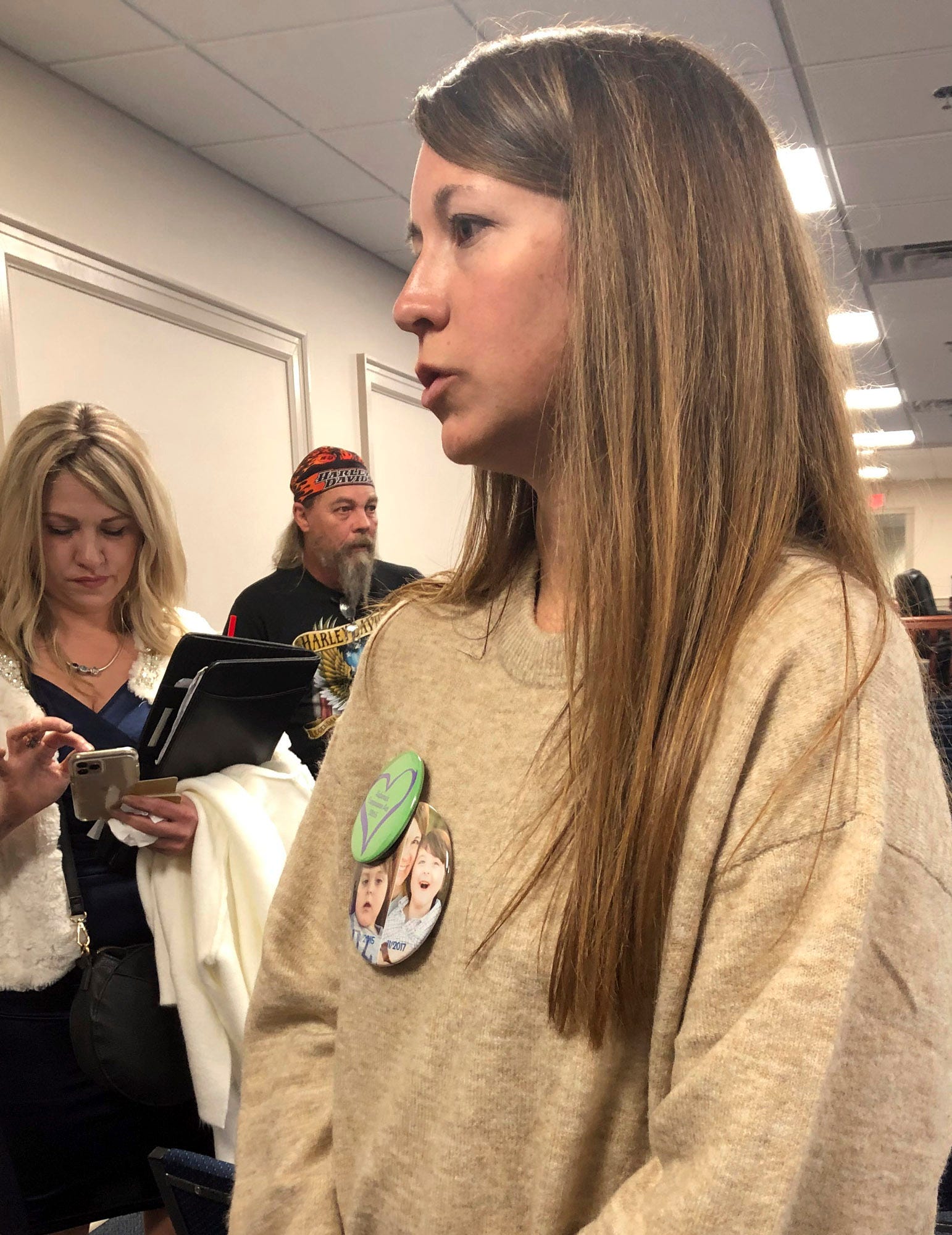 Cristi Cain speaks to reporters after appearing at a hearing where Alabama lawmakers granted initial approval to a bill allowing medical marijuana, Wednesday, Feb. 19, 2020, in Montgomery. Cain said her 8-year-old son had as many as 100 seizures daily before starting CBD oil, and the number has since been drastically reduced. (Photo: Kim Chandler, AP)

Christi Cain, whose son suffers from seizures, said that Carly’s Law and the 2016 follow-up, Leni’s Law, were not enough and urged the committee not to turn her family into medical “refugees.” The gains her son had seen, she said, were real.

“Within weeks of beginning cannabis, we saw improvement in cognitive function and alertness,” she said. “By the fourth month, our boy was back … the fog was dissipating and we couldn’t be more excited.”

The Alabama Senate approved a version of Melson’s bill last year. But the House of Representatives balked at the measure, and rewrote the bill to create a commission to study medical marijuana.

More: At medical cannabis commission meeting, stories of pain and pleas for relief

Attorney General Steve Marshall opposes the bill. Barry Matson, executive director of the Alabama District Attorneys Association, said in an interview last week the state’s district attorneys oppose the legislation, due to concerns of dosage, enforcement, regulation, and the potential for forgeries of prescriptions.

Sen. Tim Melson, R-Florence, speaks to reporters after a debate on his medical marijuana bill on May 8, 2019. The Alabama Senate debated the legislation but did not vote on it. (Photo: Brian Lyman/Advertiser)

Neither representatives of the attorney general’s office nor the district attorneys spoke at the meeting. Opponents cited a host of concerns, ranging from concerns with addiction to skepticism from the medical community. Caleb Crosby of the Alabama Policy Institute, a conservative think tank, expressed concerns about the structure of the medical marijuana commission and distribution in the bill.

“I think we’ll feel the effect of what this does in the growth of government and limiting individuals’ rights to get to a certain place,” he said.

Lori Herring, a registered nurse, cited the opposition of medical groups like the American Academy of Pediatricians to increased access to medical marijuana.

“The medical community by and large feels that legalizing marijuana has not been shown to be effective and might actually be dangerous for patients,” she said.

House Speaker Mac McCutcheon, R-Monrovia, has expressed wariness about the legislation in interviews, particularly in the proposal’s relationship to federal laws criminalizing marijuana. Supporters have pointed to a 2014 amendment that allows states to pursue medical cannabis programs without fear of reprisals.

Melson said after the vote on Wednesday his focus was on getting the bill through the Senate.

“I think I’ve got the votes, but you never know,” he said. “We have people out there who may be lobbying against it who have some influence that I’m not aware of. I have tried to work with everybody.”

While most senators on the committee expressed support, Stutts — who spoke against the bill last year — said he believed the bill would make an end run around the drug approval process.

“I think we have a well-documented process of medications being approved, being prescribed, and this basically circumvents that,” he said.

Others qualified their support. Sen. Will Barfoot, R-Pike Road, voted to get the bill out of committee on Wednesday but said afterward he wasn’t certain if he would vote for the measure on the floor, citing a concern about the commission’s potential to expand the number of conditions that could be treated.

“That is issue number one, a fine balance between those people who can really use it 100 percent and the prospects of it being a free-for-all, Wild Wild West,” he said.

But Barfoot said he had “no question” about the potential benefits of medical marijuana, and like other members of the committee had personal stories of family members who suffered from conditions that could have been alleviated by medical marijuana.

“My father passed away two years ago from cancer,” said Senate Judiciary Committee chair Cam Ward, R-Alabaster. “I’d have given anything, anything, if he had a tablet to take … something to chew on to avoid the nausea from chemotherapy.”

Dustin Chandler, whose daughter Carly is the namesake of Carly’s Law, said he had seen the benefits of cannabis with his child, and felt other people should have the same opportunity.

“I encourage you to please when you’re thinking of those things, think of the suffering people in Alabama who are hopeless, and turn them into hopeful,” he told the committee.